Louis was born in Calcutta, India and moved to Britain at the age of 15. He met Richard Cowie at the Salvatorian College in Harrow. They shared an interest in folk music and became friends. The two, with another school friend (Eugenio Grandi) formed a band in the 3rd form called The Green Ginger Trio which disbanded when its members went to university.  After three years, Louis introduced Richard to John Finch and Chris Hartley who he had started playing with as Green Ginger in 1969.  Louis had met and performed with John in The Thymes folk group and then, through the High Wycombe Umbrella Theatre group, met Chris Hartley and the three of them started 'Green Ginger". The chemistry between the four was good and with the invaluable addition of Chris Barker who provided the PA, Green Ginger’s career began in earnest.

When Richard, John and Chris focussed more on their business careers, Louis continued to perform as a solo artist, mainly in the Bristol area. In 1978 he wrote satirical songs for "That Was the West That Was" a weekly radio show, winning the prestigious Sony Radio Award for Best Comedy of the Year.  In 1984 Louis' next project was a stage musical based on the life of 19th Century inventor and engineer Isambard Kingdom Brunel performed in Bristol by the Bristol Light Opera Company and broadcast on radio throughout the west country.

1994 saw Louis joining The Greensleeves Theatre Company for a tour of Canada with an entertainment entitled "Brush Up Your Shakespeare.

As a comedy scriptwriter Louis' wrote for among others Gary Wilmot and Freddie Starr. He was also wrote plays for Radio 4 "Julie and the Prince”, TV’s "Telly Addicts" with Noel Edmunds, Call My Bluff with Sandi Tosvig and Alan Coren, and "Noel's House Party".

In 1991 he co-wrote a sitcom "Plaza Patrol" for British comedy legends Tommy Cannon and Bobby Ball and wrote their 25th Anniversary Show in Blackpool.

Over the last forty years Louis has written over 300 songs while pursuing his career as a BBC radio and TV producer and on-air presenter. He now lives in the USA and continues to write and perform. 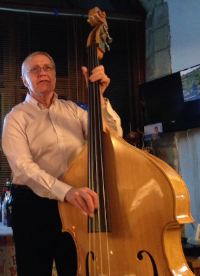 John was born in North Harrow and his first exposure to folk music was seeing Tom Paxton playing at the 1963 Newport (US) Festival on television.

Having listened to all of Paxton's music and that of Pete Seger (he still recalls 'Little Boxes' every time he sees a new housing estate), John was also introduced to the music of John Renbourn, Bert Jansch and Pentangle after hearing the theme tune of 'Take Three Girls'.

He took up playing the guitar at the age of 14 and bought his US made Harmony Sovereign (which he still has today) in 1967.  When he came together with the other members of Green Ginger he soon realised they were all better guitarists than him so he took up the Double Bass!  As a result he was in demand from a number of other performers and appeared with Fiona Stuart, Diz Disley Chris Flegg and Noel Murphy.

For some time John focussed on his business career in investment management before semi-retiring in 2016 as 'Pensions Personality of the Year'.  During this period he played with a number of locally based singers (including the Northumberlows) at charity gigs in Harrow.  He also for some inexplicable reason 'danced' with the Merrydowners Morris team before moving to Manchester in 2001.

He now splits his time between his home in Manchester, his narrowboat (Geishas Tale) and Orlando, Florida, playing when and wherever he can.  Green Ginger, however remains his main musical love and focus.

Richard Cowie was born in Stockton-on-Tees, Co Durham, but moved south as a toddler to Northwood in 1952.

He went to school at the Salvatorian College in Harrow where he first met Louis Robinson. After learning to play the guitar together they formed a school group - The Green Ginger Trio - and played regularly at local venues in the area. In the mid 60’s there was a huge range of “folk music” from both sides of the Atlantic to absorb - not to mention The Beatles who were changing the whole chart scene at the time. So, a typical GGT set was likely to include songs from The Clancy Brothers, The New Lost City Ramblers, Ewan McColl, The Kingston Trio and Woody Guthrie as well as their own fledgling efforts at writing. Norwegian Wood crept in occasionally as well with Louis playing the sitar!

A self-confessed “Jack of all trades and definitely master of none” Richard cites his own favourite guitar influences as Davy Graham, Stefan Grossman, Charlie Byrd, Doc Watson and Django Reinhart -although the list is endless.

In 1968 he went to Leeds University to study economics although continuing to play with Louis and friends in the holidays. After graduating, he was asked to join up with the reformulated Green Ginger. This meant a job in London and, as it was the only offer he had in the South East, he joined IPC Magazines as a graduate trainee in 1971. He remained there for more than 30 years holding a variety of senior management positions.

Now working part time as a magazine publishing consultant he has more time to play the guitar -largely as a soloist and occasionally with Chris Hartley from the old group. Both look forward to Louis’s visits from the USA when all four members of Green Ginger can reform to relive the old music and to develop new material.

Born in north London, some of his earliest memories involve bombs dropping nearby during the latter stages of World War 2 , so he is really, old then!

Chris was bought up in Harrow and educated at Harrow County Grammar School. In his youth he played about on an old guitar and later had a few lessons in London at the Central School of Dance Music (Ivor Mairants and Ike Isaacs). He didn’t like it much and preferred Folk and Pop to strict tempo.


So, he joined a Skiffle group called The Riversiders and gigged during intervals at Wembley Town Hall and also entered various competitions.

Chris ran his own Plastics moulding company, married and moved to near High Wycombe and taught guitar at evening classes.  Through his business he met John Zimmer. John was an amateur singer rehearsing a semi - religious musical written by a friend (called Peter Lever), who worked at the BBC. He asked Chris to join in playing with the band which included Louis Robinson and John Finch.

That was the first meeting of the Green Ginger folk group, and although the  show was a hilarious disaster, Green Ginger never looked back.

Some of the first meetings and rehearsals were held in Chris and Margarets` house and strong bonds began to develop.

John Zimmer, had a young daughter at this time and he asked Louis to write a song

about her so that he could sing it to her as a lullaby, and this Louis did.

Chris has been an important, but often forgotten, member of Green Ginger and has been organising that their sound and recording equipment since the beginning.
Now a professional sound recordist, Chris is based in North Yorkshire.